This site uses cookies. By continuing to browse the site you are agreeing to our use of cookies.
We get asked this a lot and as you start to do your own research you will make your own conclusions about what the grading system is like in Japan as there are no real hard and fast rules, just guidelines, which can be flexible. Although I’d like to make it clear that Taabo Imports make no comment about the auction houses or their grading, we inspect all of our cars before we confirm bids so we ensure they meet the clients' required spec regardless. The below is for general information and to be used as a guide.
To start off with and give you some background, each auction house has its own team of inspectors, and like any grading system, it is subject to interpretation. What one inspector may grade as a 4 another may grade as a 3.5, certain auction houses are also known for having stricter criteria for grading than others.
Below is a list of what the grading system should look like on the auction sheets and what the codes mean: 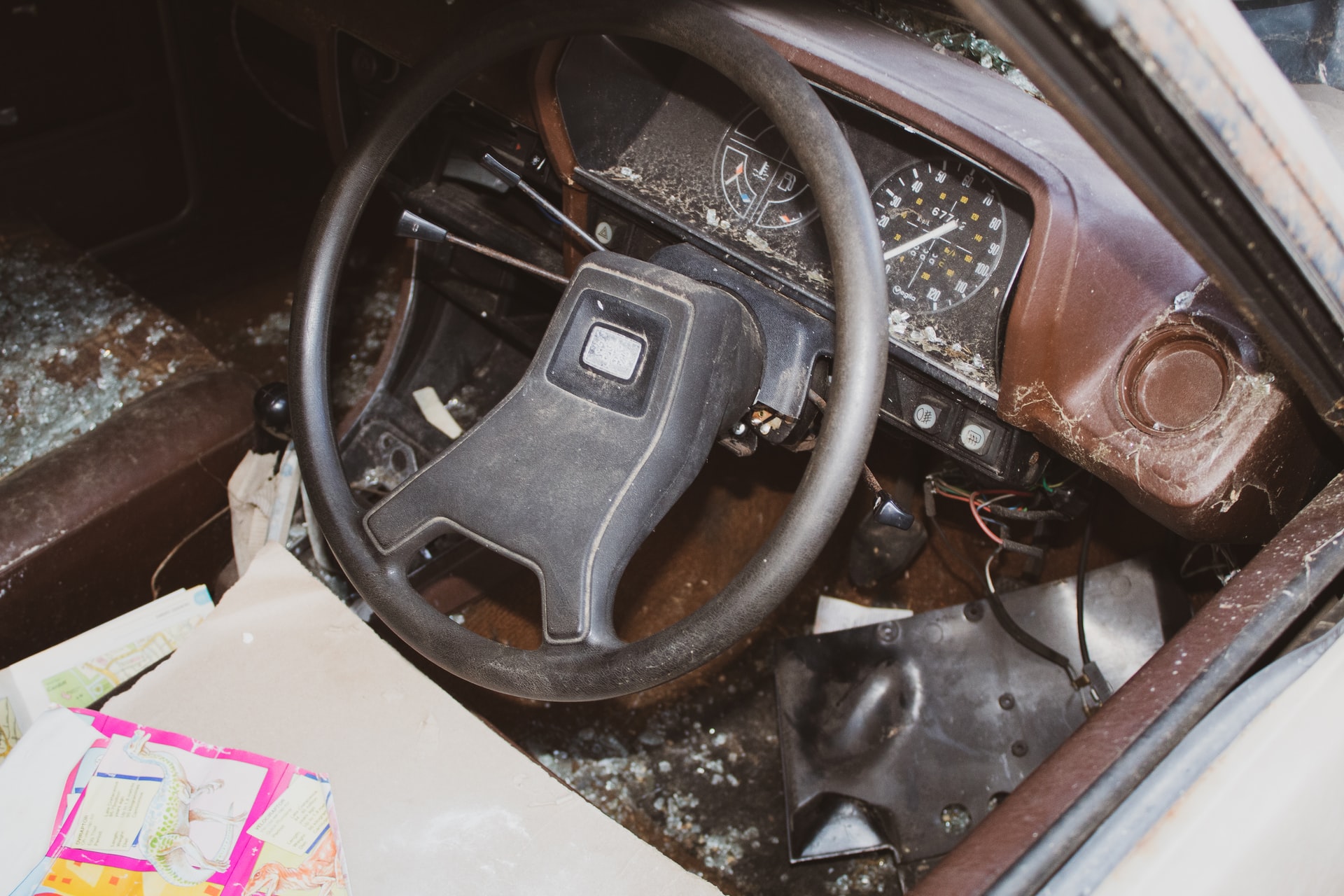 Let’s start with the interior grades

The grade given is relevant to the make, model, and year of the car, so for example a grade B for a 2021 model Toyota Alphard will be of a much higher standard than for a 1984 Toyota Levin, not only is the Levin older but generally the two cars are used for a different purpose. The lower grades C & D tend to be used for modified cars, ex drifters that have had roll cages put in, trim removed, aftermarket seats etc.


Some auction houses have gone even further and provide grades such as A / A- / B / B- to help narrow the gap between the ‘not quite clean enough for a full A but too clean for a B’.

Moving onto the exteriors

Anything grade 5 and above is ‘like new’, they will scale upwards depending on the mileage of the vehicle but the overall condition of the body will be very good. S and 6 grades tend to be used for new cars with only delivery or show mileage.


Depending on the car, the most common grades tend to be 3.5, 4 and R – I will go into more detail about grade R’s below, but first up is the 3.5. Usually, a decent grade for an older car up to the early 00’s, it will have higher mileage, be of average condition for a car of the same age and model, probably a few dings and dents, some scratches noted, not a fully loaded fixer upper but will need a careful hand and a good tidy up. Grade 4 is one above, the bodywork will be in better condition usually the interior will match and be of a decent condition for a car of its age. Grade 4 is a nice one for older models that you cant get new anymore such as a 33 GTR that are rare to come through with incredibly low miles.
Of the grades to avoid, 2 will be your first filter, usually riddled with rust or corrosion holes, sometimes worth it for parts but once you have added your shipping and fees it can still be a pricy option for breakers. One we avoid 99.999% of the time and one we suggest you avoid too.


Another one we avoid is *** grades. Non-runners or major engine issues, usually these are moved by crane or trailered on and off the boats, this can end up being more costly than just outright buying a decent car. Not worth the hassle unless you have a big wallet for a big project. 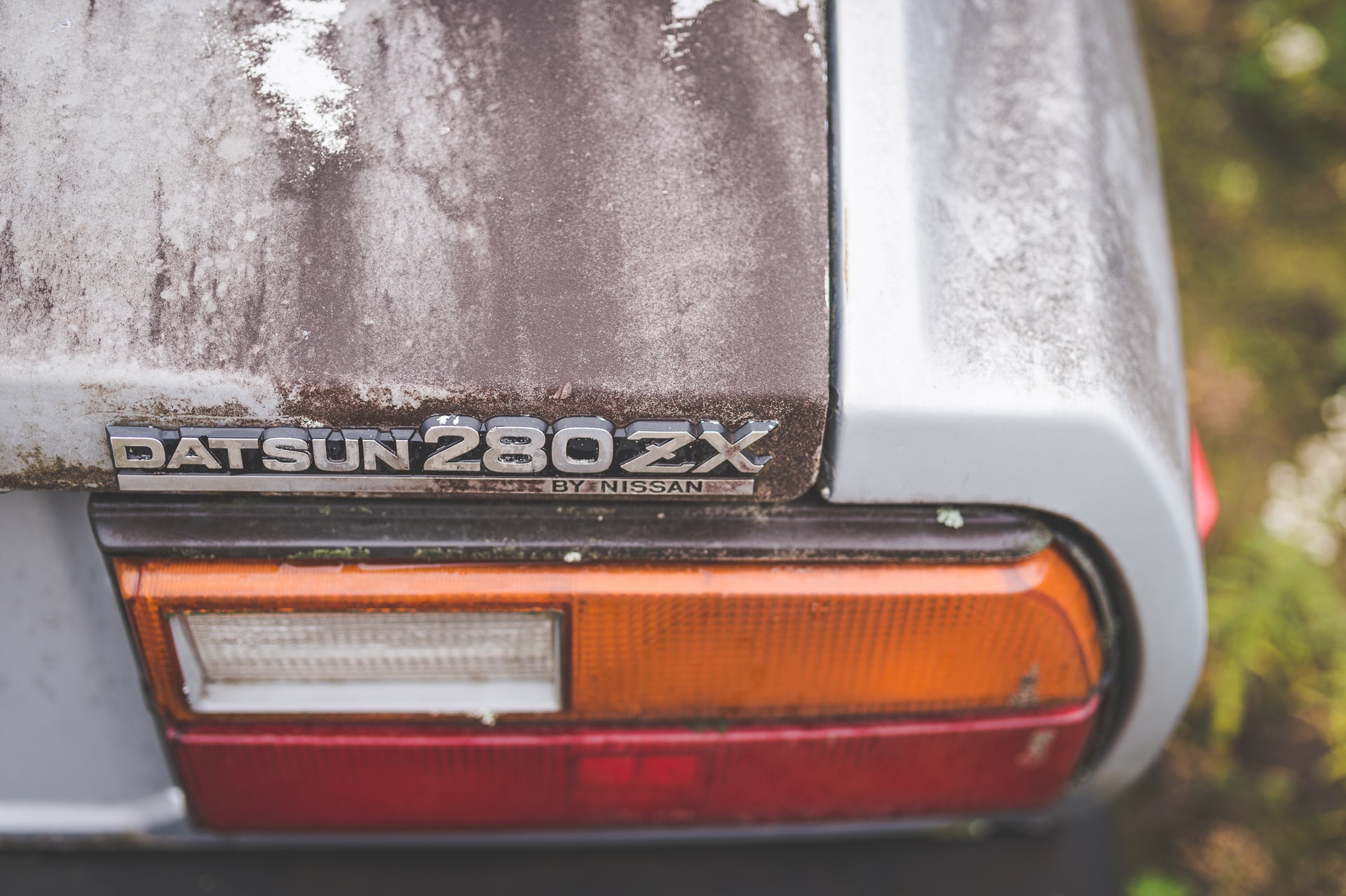 Now for the one that most people debate over Grade ‘R’ – what does a grade R mean, is it is a sign of a bad car? The honest answer is, we can't say for sure. But, we can make an informed decision about grade R’s on a car by car basis and if it's right for you. Off the bat I would say, if you are in the market for a nice looking unblemished car and you want it show-ready, grade R’s are generally not going to be for you.  However, if you wanted something a little bit cheaper, may need some work doing and you want to get your hands dirty, this is probably the grade you’d be looking at.
Usually grade R is indicative of accident damage, most commonly denoted by the XX on the auction car diagram meaning that specific panel has been replaced. The problem with such a generic system is that the panel may have been replaced due to a small ding from a shopping trolly, causing the car to be graded an R when in reality the overall bodywork could be in excellent condition. It is also a catch-all term used for modified cars, technically a car with a carbon fibre aftermarket bonnet has had a panel replaced but it depends on the auction house as to whether they deem that panel replacement as an R grade. To complicate things even further we see plenty of cars that have come through auction with panels replaced or aftermarket parts or with large dents that have scored 3.5 or 4’s. 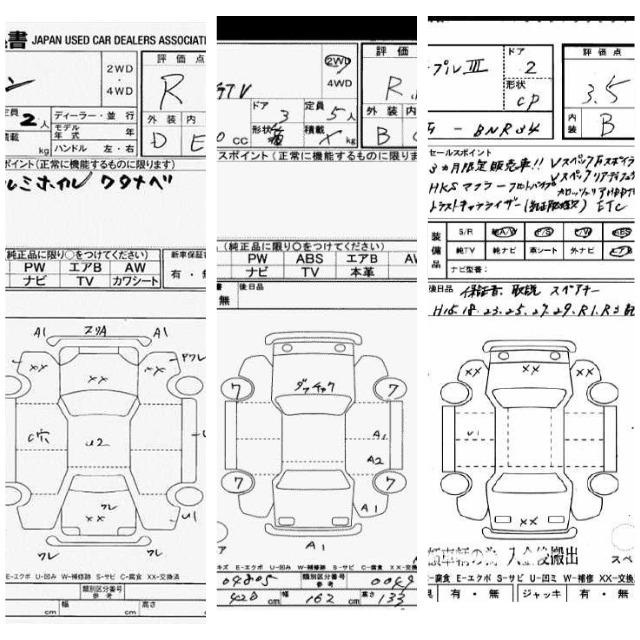 As an example here are three separate auction sheets, both grade R sheets are for the same make and model car whereas the auction sheet graded 3.5 is for a car of a higher value. Going from the diagrams and grades alone, the first sheet has the whole front end replaced along with the boot, the middle has had no panels replaced, and the final one has had the same panel replacements as the first car and yet is graded 3.5. Now, reading the notes along with these sheets I can tell you that the first car has major engine issues, however, if you were to look at the grades and diagrams alone, there is a significant difference between the three. Should that last auction sheet really be a 3.5, should the middle one really be graded R, who is to say?

The reality of auction sheet grades is that it is a guide and a guide alone, it can be helpful in terms of discarding cars that you don’t want (such as *** / 2) but in the overall sense each auction house and each inspector grades each car differently. It’s not uncommon to see an unsold vehicle get relisted at a different auction house for a different grading, which is why we tell people to never buy from the auction sheet alone. Inspection is always the best route and if you can we always advise getting a VX report if possible for a fuller picture of the cars history.

Schedule a call with us